10 Fast Facts About the Microwave

Microwave energy was initially developed for radar systems during World War II. In 1945, Dr. Percy Spencer was working on radar systems for Raytheon Corporation when he accidentally discovered that microwaves could be used for cooking. While conducting experiments with a new style magnetron, a candy bar in his pocket melted.

Get a firsthand account in this interview with Dr. John Osepchuk [1].

The first commercial microwave oven was produced in 1947. The oven was about 6 feet tall and weighed about 750 lbs. In 1965, Raytheon acquired Amana® Refrigeration.  Two years later, Amana brought the first affordable home microwave to market: the Radarange™—a name that is still associated with Amana® Commercial ovens and ACP, Inc. 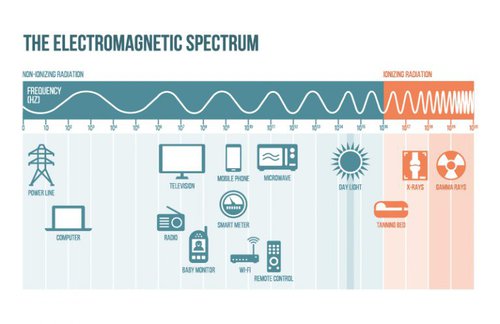 The heart of the microwave oven is the magnetron, a device that produces radio waves. These waves excite water molecules within food, causing them to vibrate rapidly. This vibration results in heat, cooking the food from within.

The Slotted Choke Door Seal is the reason microwave ovens are safe and available for public and home use today. It virtually eliminates microwave energy escaping from the oven cavity. One of its inventors, Dr. John Osepchuk is still an ACP consultant.

Modern microwaves are regulated with stringent standards. [2] Each ACP oven is tested to meet and exceed these standards.

According to a study by Harvard Medical School, “because microwave cooking times are shorter, cooking with a microwave does a better job of preserving vitamin C and other nutrients that break down when heated.” Steaming in the microwave is actually preferable to submerging foods in water, which can result in a loss of nutrients. “The cooking method that best retains nutrients is one that cooks quickly, heats food for the shortest amount of time, and uses as little liquid as possible. Microwaving meets those criteria.”[3] 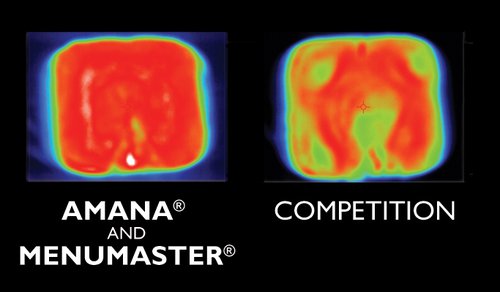 A popular yet imperfect “solution” to eliminate hot spots is to rotate food on a turntable. With turntables, individual hot spots are eliminated along donut-shaped paths, only to be replaced by bands of hot and cold. Depending on the oven, sometimes the center is cold, sometime its hot. But never uniform. And, more than half the oven’s volume is wasted outside the turntable- a huge waste of money and capacity.

To eliminate hot spots, advanced oven designs like ACP’s, agitate and reflect the microwaves instead of the rotating the food. Microwave energy is reflected off a rotating antenna. This “chops up the nodes”, sweeping them around the oven cavity like a spotlight off a disco ball.

Fueled by decades of dedicated research and development, ACP’s expertise in ‘tuning’ pairs geometry of the cavity with antenna design to optimize energy distribution and intensity. The result is even and superior cooking performance.

8. COOK SETTINGS—ONE SIZE DOES NOT FIT ALL

Different foods respond differently to microwaving. Balancing cooking power and cooking time is key to overcome the differences between food and ingredients and get a good result. For example, food with a high amount of water, salt, sugar or oils/fat cooks faster because of a higher rate of MW absorption.

The ACP Culinary Center team of expert chefs and food scientists are masters of all things microwavable. They provide expert support to customers, including menu development and cooking times.

According to Energy Star, “Microwave ovens use less energy (up to 80% less) than conventional ovens. In addition to saving energy, microwave ovens generally cook food much faster, and don’t generate as much heat in your kitchen, so you could save on air conditioning costs during the summer.”[4]

So how much does it cost to use a commercial microwave oven on a daily basis? Check out the energy cost breakdown by model. 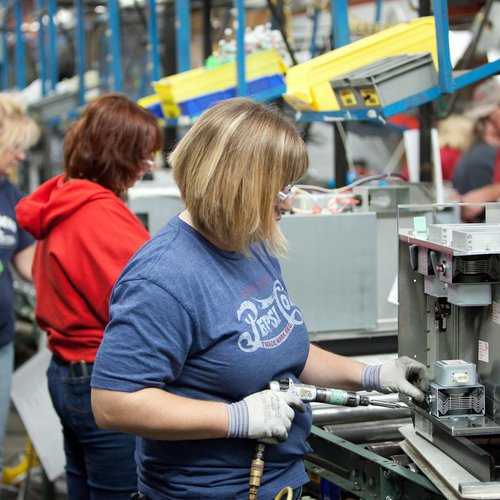 10. AN AMERICAN TRADITION IN INNOVATION AND MANUFACTURING

Microwave cooking was first discovered in the U.S.A in 1945. The first consumer microwave was developed and manufactured in Iowa in 1967. Now, over 50 years later, ACP is proud to continue the legacy as the only manufacturer that fabricates and assembles both high-speed ovens and microwave ovens in the USA.

ACP, Inc. is the manufacturer of XpressChef™ high-speed ovens, as well as Amana® Commercial and Menumaster® Commercial microwave ovens. ACP ovens have been ranked best in class for over twenty-five years, and are preferred in areas of performance, reliability, service, construction, ease-of-use and safety.

Headquartered in Cedar Rapids, Iowa, ACP, Inc. is a member of the Ali Group– a privately held company based in Milan, Italy that specializes in designing, manufacturing and servicing of commercial foodservice equipment. The Ali Group operates globally through 78 brands with sales and service subsidiaries throughout Europe, North America, South America, the Middle East and Asia Pacific.